SISlet: A Small Gathering of International Women Moving at the Speed of the Body for New SISters

It’s 7:30 PM in China and 7:30 AM on the east coast of the United States. Twelve women have gathered to welcome Chun Fang to Sustaining International Sisters (SIS) and InterPlay. We will play for one-hour only and have no more than 12 SISters. Hence the term “sislet.” “-Let” is a diminutive suffix that attaches to nouns to denote smallness (i.e. booklet, piglet). A usual SIS: InterPlay gathering will last two hours and have more than 20 women.

Online Global SIS connects women globally to form friendships through InterPlay, an active creative way to unlock the wisdom of the body. As we grow our SISterhood, we are discovering that newcomers need to “move at the speed of their bodies” both in language and playful movement, voicing, and storytelling. SISlets give us the opportunity to offer incremental steps into the world of InterPlay, offering “bite-size” explanations about InterPlay tools and forms.

When “playing” globally, language becomes a “thing” of importance. InterPlay has two languages. The first is English, and the other is “insider” InterPlay language.  When an international woman is communicating in English with us, English is generally her second or third language. She is sometimes fearful of misunderstanding the facilitator’s explanations or directions made in English. Maybe, she can’t understand what her partner is saying. It is possible that she will do something “wrong.” She grapples with her listening comprehension and dwells in uncertainty.

An even more intense fear arises when it is her turn to speak in English. What is it like to speak imaginatively and playfully in another language? What does babble mean? If the directions are understood, how does she “translate” her response into English? Do her thoughts actually translate into another language and culture or do they get trapped in limited vocabulary, idiom and nuance? Should she just jump in and try to communicate for the fun of it? Can she speak in her language and have that be okay?

Of course, for us InterPlayers, the answer is YES – jump in, experiment, play, discover, and of course, speak in your native language if that feels good! However, a newcomer doesn’t know yet that in InterPlay whatever she does in response to a prompt is “okay.” Being together and connecting with other women from around the world in a shared space is one of the primary goals of our SIS gatherings. A practice we do in InterPlay is experiencing that each of us is “enough,” and what we bring to this shared space is “perfect.” Another goal during our time together is for each woman to connect with herself. We like to understand both personal and communal connections and practice affirming and accepting them.

What about the “language” of InterPlay? We do have an “inside” language or jargon to talk about what we do and think in InterPlay. As a result, we are asking internationals not only to step into English and American culture to learn InterPlay, but also requiring them to dive into a microcosm of American culture –InterPlay. For example, the InterPlay phrase, “body wisdom” means roughly making choices based on our own body knowledge for our own good, the good of others, and/or the good of all of creation. But to understand this definition of body wisdom, we need to understand what “body knowledge” means (noticing the patterns of our own body data over time) and how does it relate to “body data” (the bits and pieces of physical information that we notice from moment to moment). Really? Often, if we move faster than the speed of the body, the explanation gets lost in translation.

Therefore, before being able to discuss body data, body knowledge, and body wisdom, we need to be able to understand what “noticing” means and how to actively participate in “noticing.” Reflecting on one’s thoughts, feelings, physicality and overall spirit in the moment may not be something done either personally or culturally. And, then there is the language barrier again of how these “noticings” might be expressed in English and concerns if it is appropriate or not and how their noticings will be received.

You begin to see how SISlets can help us playfully construct language “communication bridges” step-by-step with international women who are first-time InterPlayers. In addition to engaging in the languages of English and InterPlay, there is, in fact, still other languages –more universal ones – those nonverbal languages of movement and voice. Imagine speaking in a nonnative language, “dancing,” and using your voice in unusual ways –well, it’s a leap of faith. For first time internationals, it is something akin to patting your head, while rubbing your stomach and jumping up and down at the same time while talking about a strawberry or explaining a view from a window in your apartment – something almost torturous and impossible.

I am so thankful for the courage that these international women bring with them when doing InterPlay for the first, second, or even third time. My experience of them is a deep desire to offer themselves in play and a readiness to accept others as they are. Curiosity abounds along with much laughter.

I am so thankful to the other women who have done InterPlay and who are calling themselves SISters. They are showing up to play with and support these newcomers. Our global SISterhood is amazing, deep, and rewarding!

Deep appreciation to the co-founders of InterPlay, Phil Porter and Cynthia Winton-Henry, and to my daughter, SISter, and co-founder, Canan Arikan.

Find out more about SIS here,and about InterPlay, here.

Popular posts from this blog

Teaching Online: A Rollercoaster Ride to a New Normal 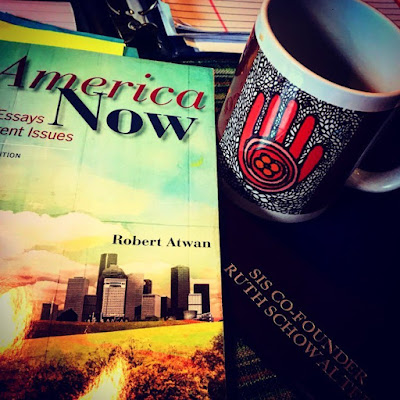 Wait! What? Why am I teaching English language communication online? And, really, is it becoming the new normal? Yes! After teaching almost 200 hours online (150 academic & 50 InterPlay), I can proclaim a resounding Yessssssssssssssss.... It’s the 2020 Pandemic. I’m an educator. I teach international students advanced oral English communications at the Georgia Tech Language Institute (GTLI). Hop on the rollercoaster! Suddenly in the spring, I went from teaching students face-to-face sharing a physical classroom space together to conducting classes with them from my laptop, the etherspace whooshing around us. The New Normal. Seeing students in square tiles across my computer screen. I was teaching Advanced Academic Speaking to undergraduates at the GTLI. The students came from Saudi Arabia, South Korea, Yemen, and the Congo. That etherspace managed through Bluejeans (Georgia Tech’s online platform for classes) sometimes connected us beautifully. Other times, students
Read more 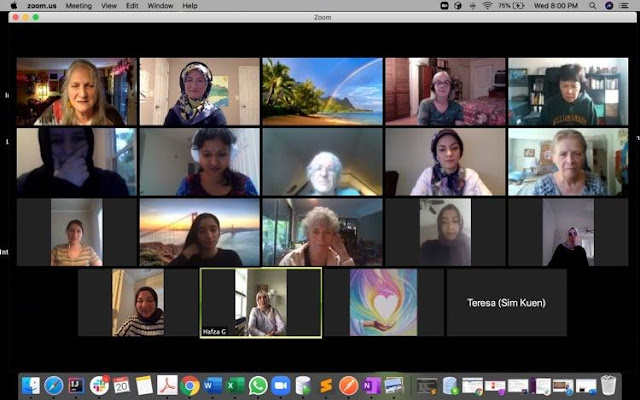 -I feel love and peace in mind. I feel like I am standing in front of God and dancing happily… -I felt light and warm with gratitude.    I felt grace... On May 20 th , 2020, a few days before Ramadan concluded for 2020, the Zoom chat box was filled with comments from 7 women from Turkey, 2 from Iran, 1 from India, several Americans and others – most of us currently living in the United States.  It was at this moment that I had two InterPlay worlds – Dance Chapel and Sustaining International Sisters(SIS) – collide to honor Ramadan, a deeply religious time period for Muslims, the religion of my Turkish and Iranian friends.  I began leading the Wednesday night  Dance Chapel in Cynthia Winton-Henry’s Hidden Monastery at the beginning of April because of the Covid-19 Pandemic. There were so many of us sheltering at home, that Cynthia expanded these interfaith dance chapels from only Monday and Thursday to every day of the week. Our Dance Chapels use elements from InterPla
Read more

An active, creative way to unlock the wisdom of the body with a focus on education and communication